Working within my role at World Vision means that every day I get to hear uplifting stories about the relationships forged between sponsors and the children they sponsor. As a child sponsor myself, I feel a strong sense of camaraderie with other sponsors. We all have the same heart for vulnerable children. So, when I heard that there was a group sponsor visit to Albania planned, I signed up to go as one of the sponsors.

My husband I each sponsor a child in Albania.  As my husband couldn’t be there, I agreed to meet his child Mikeljan on his behalf. A lot of prayer and preparation went into our meeting. Before my trip, my husband told me everything he knew about Mikeljan and especially how much he loves football! Between the two of us, we did some shopping for gifts for Mikeljan and his family.  While in Albania, the wonderful World Vision team worked hard planning the sponsor visits and all the itinerary.

The night before I was due to meet him, I stayed in too reflect and pray about our time together.  I was nervous  about the meeting because Mikeljan is a teenager and I wasn’t sure of the welcome I would receive.  Would he think it was ‘uncool’ or ‘lame’ for instance.

We first met at the World Vision office where Mikeljan arrived accompanied by his mother. To my surprise, he spoke very good english! I had brought a letter for Mikeljan from my husband which a staff member translated on paper.  Another staff member translated the conversation between Mikeljan’s mother and I. I showed him photos of my husband Jim and talked about him.

We walked by a lake and later had lunch together. His mother spoke to me about her family and her concerns for Mikeljan. I noticed there was free wifi, so I video-phoned Jim so he could speak to Mikejan in person.  They each had the biggest grin on their faces as they chatted away about  Mikeljan’s biggest passion-football!

I was so impressed with both Mikeljan and his mother. They were such lovely people. Mikeljan is a bright, courageous, sociable and articulate boy.  His mother was lovely, warm and gracious. I felt like I had just met family.

The following day, it was time for me to meet my sponsor child Andrea. It was another wonderful meeting but with some differences.  Andrea is only 7.  He came with his mother, older brother and younger sister. He was very shy at first but soon warmed up.  Nobody in the family spoke english but luckily we had someone on hand to translate for us. Andrea thanked me for the hot wheels I sent to him in the post.  Unfortunately, he lost the green one which was his favourite.  Since I have been home, I have been looking at green hot wheels but they are all so different and I have no idea which one he lost! 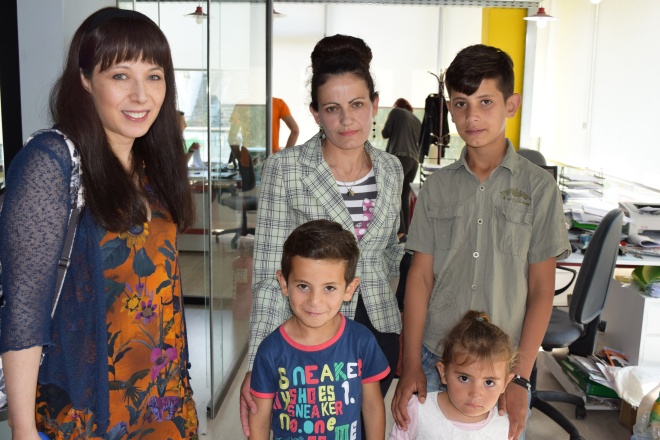 I knew ahead of time that we would spend time at a beach. I brought lots of toys to play with. The most popular was a game of velcro mitts and a ball. When we had lunch, I brought out the Jenga which was a big hit as the whole family could play.

After only ever seeing some photos and a couple of videos of Andrea, it was nice to get to know more of his unique personality. He is such a fun, endearing child with a gorgeous, contagious smile. The family were sociable and sweet and we had a wonderful time together.

The trip gave me real insight into the culture and people of Albania. I feel an equal sense of compassion and hope for this country. I am so thankful for the opportunity that sponsorship has given my husband and I to help the communities where Mikeljan and Andrea live.

To sponsor a child through World Vision UK, please go to their website by clicking here.

This site uses Akismet to reduce spam. Learn how your comment data is processed.