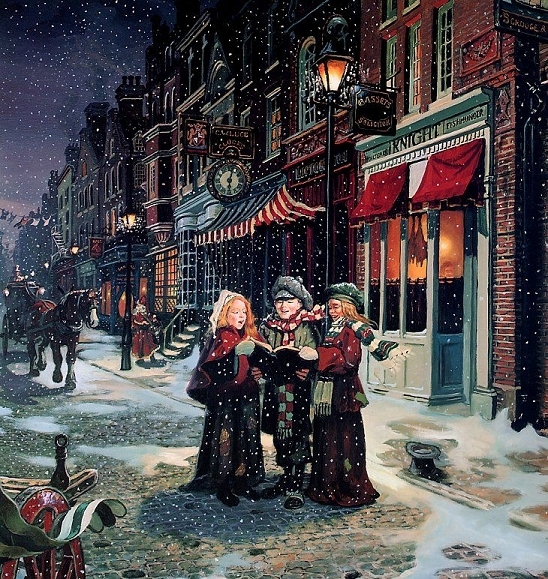 As mentioned in my 100th blog post, I will be writing several blog posts on the subject of Victoriana Christmas.  In both the U.S. and U.K. the period between 1837 and 1901 is referred to as the Victorian era. It is the period in time when Queen Victoria ruled Britain. You may wonder why Americans also referred to this as the Victorian age.  It is because as it was still fairly a new country, Americans didn’t yet know what it was to be American within its own cultural identity so they were still being influenced by the style, manners and morals of life in Great Britain and France.When we think of Victorian times, we often think of it in mainly one of two ways. One way is one of beauty. We envision the houses and the furnishings and the clothing of the wealthy Victorians. The other way we think of Victorian times is influenced by the books we may have read by Charles Dickens or Thomas Hardy. Within these literary novels we read of the plight of the poor, the prison conditions and the injustices that went on.  So why have I chosen the Victorian era as a theme for Christmas blog posts? First of all because the Victorian period was a period in history that marked great transition.  It was during this time that it experienced its second industrial revolution which led to the burgeoning of the middle class. There was a growth in the manufacturing of merchandise that improved their way of life and people started to make more money. So while some poor stayed poor (and some grew poorer), others transitioned to middle class and the living conditions of the poor became more widely known.  Many were inspired to fight or change and improve conditions.  There were wonderful reformers who helped to improve so many conditions in both Victorian America and Victorian Britain.  Some of these great reformers in Britain were Lord Shaftesbury who brought about the improvement of child labour (though it still had a long way to go); Charles Dickens and Thomas Hardy as mentioned before with their literary works bringing awareness of both the living conditions of the poor as well as the humanity of the poor; William Wilberforce  campaigned to end slavery;  William Booth, the founder of the Salvation Army, which dedicated itself to reducing poverty; Florence Nightingale raised the standards of hospitals and the nursing profession.  In the U.S. Abraham Lincoln helped abolish slavery; Susan B. Anthony was a political activists for women and human rights; Victoria Woodhull one of the leading activists for women suffrage and first female presidential nominee; Mary Harris Jones who organized mine revolts against mine owners….and the lists goes on and on.  There were also great scientists and a wealth of literary greats.  It is amazing just how many great Victorian celebrities there are. This was the time that Christmas began its transitions as well.  Victorians began putting up decorations and buying gifts for their loved ones.  So while there were hardships and sufferings there was also beauty and progress.  All of these changes meant that more and more people began to celebrate Christmas in more style. So the next several blogs we will focus on how Victorians celebrated Christmas and how we can add a bit of Victoriana to our Christmas celebrations.

2 thoughts on “Why A Victorian Christmas?”

This site uses Akismet to reduce spam. Learn how your comment data is processed.